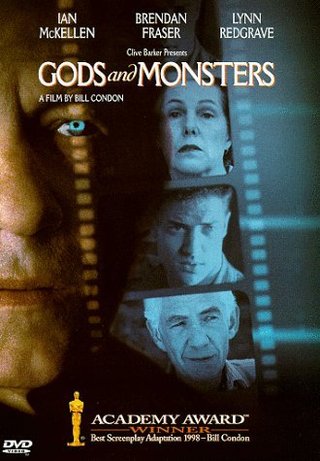 Currently out of print/limited availability. Click on image for used or collectible copies.

THE WORLD OF GODS AND MONSTERS: A JOURNEY WITH JAMES WHALE

Written, co-produced and co-directed by David J. Skal, THE WORLD OF GODS AND MONSTERS is a behind-the scenes chronicle of the making of the 1998 Academy Award-winning film GODS AND MONSTERS starring Ian McKellen, Brendan Fraser and Lynn Redgrave. Narrated by author/ filmmaker Clive Barker, the documentary interweaves the life and career of James Whale, director of the original FRANKENSTEIN, with the making of the acclaimed biopic. Interviewees include writer/director Bill Condon (Oscar winner for best adapted screenplay), Ian McKellen, Brendan Fraser, Lynn Redgrave, and Christopher Bram, author of the novel FATHER OF FRANKENSTEIN, on which the film was based.