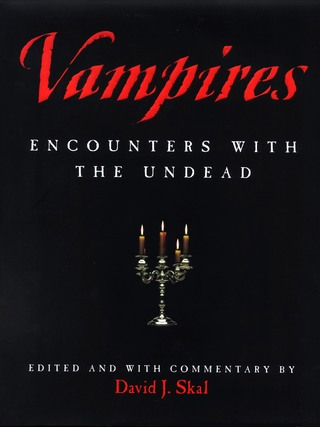 VAMPIRES
Encounters with
the Undead

Edited and annotated by David J. Skal, Vampires: Encounters with the Undead is the largest illustrated compendium of vampire fact and fiction ever published.

According to legend. Vampires live forever - and our fascination with them seems equally enduring. Perhaps what springs to mind when you contemplate these elusive, terrifying creatures is a flickering, black-and-white image of Bela Lugosi in full evening attire, gliding down a towering staircase bidding his unwitting guests a civilized "good evening" or, with a swirl of his cape, metamorphosing into a bat and disappearing into the light of a full moon. But if the Hollywood version of Count Dracula is the one most indelibly etched in our minds, it is by no means the first or only incarnation of the vampire to haunt our dreams and capture our imaginations.

In this towering collection, featuring two centuries of spine-tingling literature, lore, ephemera, and history, noted vampire authority David J. Skal takes us on an unprecedented tour through this most captivating of subjects. From classics of the world's literature to pulp magazine serials to actual historical accounts, Skal has packed this volume with great, bloodcurdling writing. There's even an interview with a contemporary, self-confessed blood - drinker.

Every page of Vampires also features a column of commentary by Skal, expanding and reflecting upon the stories and exploring the evolution of the vampire mystique in folklore, Literature, and popular culture. Some 200 beautifully rendered black- and- white images, most from Skal's extensive personal collection and ranging from vintage engravings to film stills and posters to pop - culture artifacts, make this book a true Vampire's Feast.

Do vampires really exist? Says Skal in his introduction. "It should be obvious that vampires prowl the very fabric of modern consciousness...You will have to draw your on conclusions, but I hope this book will provide ample food for thought. And skeptics may be admonished to remember one of Professor Van Helsing's shrewdest observations: 'The strength of the vampire is that people will not believe in him.' Disbelieve, then, at your own peril."

In addition to his commentary, editor Skal contributes a new translation of Alexis Tolstoy's classic tale "The Family of the Wurdalak" (the basis of Mario Bava's BLACK SABBATH, starring Boris Karloff) and "Fatal Image," a fascinating exploration of Philip Burne-Jone's mysterious 1897 painting, "The Vampire."