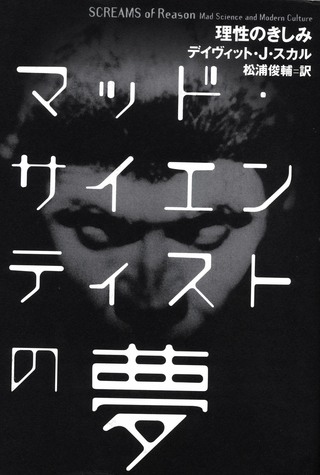 "...a pioneering book that uncovers the deep roots of many common fears of our age."
--Washington Post

From Frankenstein to Jurassic Park, the mad scientist in his restless quest for world domination and godlike dominion is one of the modern world's most instantly recognizable, yet least understood icons.

In Screams of Reason, David J. Skal, America's premier chronicler of popular culture's dasrker obsessions, explores our perennial fascination with demented doctors, crazed clinicians, and technology-obsessed fiends. From nineteenth century Romantic literature to Dr. Strangelove and Hannibal Lecter, the mad scientist proves himself to be a figure of myriad masks and guises -- a far more interesting archetype than the nerd-run-amok of B-movies would indicate.

A prototype outsider, shunted off to the sidelines of serious discourse -- to Saturday matinees, pulp novels, comic books and cartoons -- the mad scientist, Skal argues, is a necessary lightning rod for otherwise unbearable anxieties about the consequences of modern science and technology. Illuminating everything from the eggheaded embodiment of 1950s anti-intellectualism to the contemporary anxiety about designer genetics (a field all too eager to "tamper in God's domain"), Skal brilliantly dissects and celebrates two centuries' worth of perfectly amoral monsters draped with shining stethoscopes and attended by adoring, malevolent hunchbacks.

Screams of Reasonis an insightful, provocative, and always amusing exploration of the prop-laden laboratories of 1930s Hollywood, the mad-science mystique that colors the cult of the computer, the pseudo-science folklore of UFO abductions, and the demonization of doctors and medicine in the brave new world of HMOs and managed are.
Whether examining the Heaven's Gate suicides, the Luddite mania of the Unabomber, the Freudian implications of the Frankenstein monster's forehead scar, Screams of Reason will forever change your perceptions of those maniacs in white lab coat who forever haunt our technological dreams and nightmares -- what they tell us, what they want, and and why they never go away.