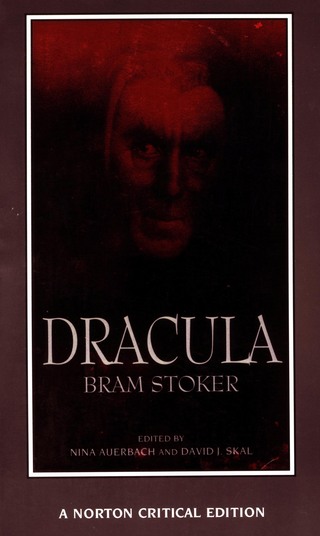 The definitive academic edition of Bram Stoker's classic. To purchase now, click on link below.

"...a wonderfully thorough and useful casebook...will surely become the standard text for upper-division undergraduates and graduate students...Auerbach and Skal were ideally suited to editing this volume..."
--Science Fiction Studies

When it was published in 1897, Bram Stoker's DRACULA became one of many tales available to readers that pitted humans against monsters. Robert Louis Stevenson, Rudyard Kipling, and H.G. Wells, among others, all published in the same genre at about the same time. Yet it is DRACULA that twenty-first century readers cannot forget. The text of this Norton Critical Edition is that of the 1897 first edition. It is fully annotated.

A rich selection of background and source materials is provided in three areas. "Contexts" includes probable inspirations for DRACULA in the works of James Malcolm Rymer and Emily Gerard. Also included are a discussion of Stoker's working notes and for the novel, and "Dracula's Guest," Stoker's abandoned opening chapter. "Reviews and Reactions" reprints five early reviews of the novel. "Dramatic and Film Variations" focuses on theatre and film adaptations of DRACULA, two indications of the novel's unwavering appeal. David J. Skal, Gregory A. Waller, and Nina Auerbach offer their varied perspectives. Checklists of both dramatic and film adaptations are included.

A Chronology and selected bibliography are also included.

"LISTEN TO HIM..." STOKER'S DRACULA ON AUDIO CD