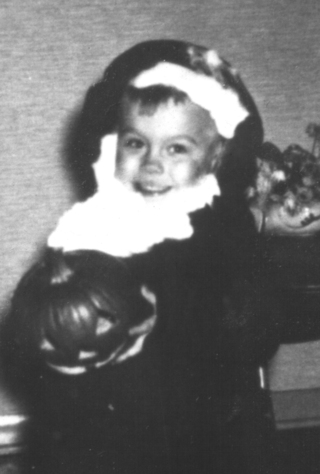 Halloween 1955: David discovers the pleasures of a nightmare before Christmas.

Born June 21, 1952 in Garfield Heights, Ohio, David John Skal became fascinated with monsters at the height of the 1962 Cuban missile crisis, when indestructible monsters like Dracula, Frankenstein and the Wolf Man provided a "nuclear security blanket" for a whole generation of youngsters.

Active as an editor and reporter on his high school newspaper, he was granted a journalism scholarship to Ohio University, Athens, where he earned a bachelor's degree in 1974. His work as film critic, arts reporter, arts editor and assistant managing editor of the Ohio University Post, one of the country's leading college papers,led to his three-season appointment as publicity director of the University-operated Monomoy Theatre on Cape Cod. Following his graduation, he served as a public affairs intern in the office of National Endowment for the Arts chairman Nancy Hanks, and went on to the position of Publicity Director at the Hartford Stage Company, where he oversaw all media relations while the regional company fund-raised, built and opened a major new facility in downtown Hartford. In 1978, he was staff writer for the American Conservatory Theatre in San Francisco, with responsibility for the content of all printed materials. From 1979-1982 he was Publications Director of Theatre Communications Group, a national service organization in New York City. From 1982 to 1992 he was president and creative director of David J. Skal Associates, Inc. (later Visual Cortex Ltd.), a Manhattan-based, nationally oriented design and marketing consultancy with clients ranging from the Metroplitan Opera to regional theatre, dance and music organizations.

A published writer of short fiction since his early college years (he was one of the youngest students ever admitted to the celebrated Clarion Writers Workshop in fantasy and science fiction), he authored three well-received science fiction novels: SCAVENGERS (1980), WHEN WE WERE GOOD (1981) and ANTIBODIES (1987). His long-standing interest in Dracula and his extensive contacts in the theatre world led to his first nonfiction book, HOLLYWOOD GOTHIC: THE TANGLED WEB OF DRACULA FROM NOVEL TO STAGE TO SCREEN (1990), followed by THE MONSTER SHOW: A CULTURAL HISTORY OF HORROR (1993). Many other books followed, including V IS FOR VAMPIRE (1995); DARK CARNIVAL: THE SECRET WORLD OF TOD BROWNING (1995,with Elias Savada); the Norton Critical Edition of Bram Stoker's DRACULA (1996, co-edited with Nina Auerbach); SCREAMS OF REASON: MAD SCIENCE AND MODERN CULTURE(1997); and the monumental anthology VAMPIRES: ENCOUNTERS WITH THE UNDEAD (2001, the largest such illustrated/annotated compendium ever published.

Skal began his work as a documentary filmmaker writing and co-producing segments for the A&E Network's award-winning series "Biography," and contributed scripts chronicling the lives and careers of Bela Lugosi, Boris Karloff, Lon Chaney, Jr. and Angela Lansbury (with whom he had worked during his theatre career). In 1999, he wrote, co-produced and co-directed a behind-the-scenes chronicle of the Academy Award-winning film GODS AND MONSTERS. The same year, he was tapped by Universal Studios Home Video for a series of twelve original DVD documentaries exploring the legacies of the studio's classic horror and science fiction films. His DVD work has continued with Disney Home Video's "Jules Verne and Walt Disney: Explorers of the Imagination" (2003) and the feature commentary for Warner Home Video's special-edition release of Tod Browning's FREAKS (2004).

His recent/current projects include CLAUDE RAINS: AN ACTOR'S VOICE (University Press of Kentucky), ROMANCING THE VAMPIRE (Whitman Publishing, 2009, and)CITIZEN CLONE: THE MORPHING OF AMERICA (Faber and Faber, forthcoming).David Skal is a member of the Authors Guild. He lives and writes in Glendale, California.