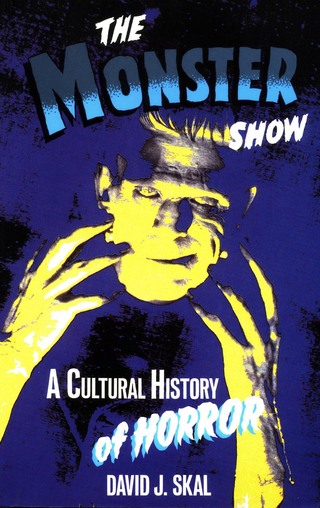 The British cover of David's most popular book. For publication history and purchase link, click title in right hand column. 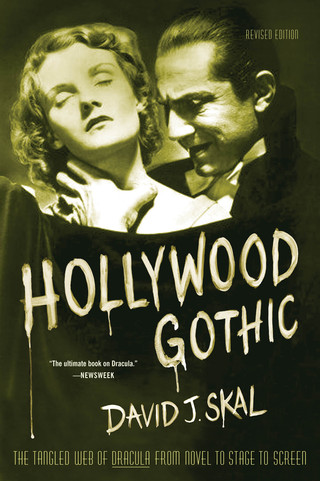 "The ultimate book on Dracula" (at least according to Newsweek For an excerpt, reviews, and SPECIAL DISCOUNTS, click on title in "Selected Works" column. 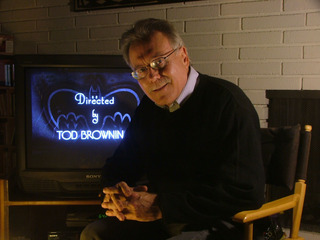 Horror historian David J. Skal bids you welcome to a relaunched and improved MONSTERSHOW.NET. Here you'll find everything you need to know (or didn't know you needed to know) about David's books, his media projects and appearances, his book signings and lectures, and many new links to his his favorite websites and resources. 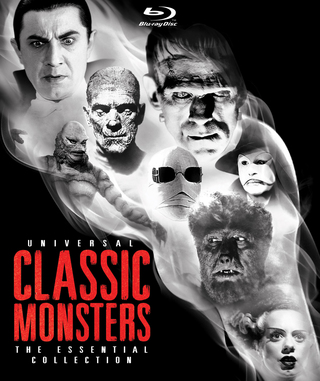 All of David Skal's previous DVD documentaries and extras have been wrapped into the stunning Blu-ray box set UNIVERSAL CLASSIC MONSTERS: THE ESSENTIAL COLLECTION.

David will be a special guest at SCARE-A-CON September 12-15 at the Turning Stone Resort and Casino in Verona, New York. In addition to judging the SCARE-A-CON film festival, he'll be signing books, joining in discussion panels, and making a special presentation to celebrate the 20th anniversary of THE MONSTER SHOW. 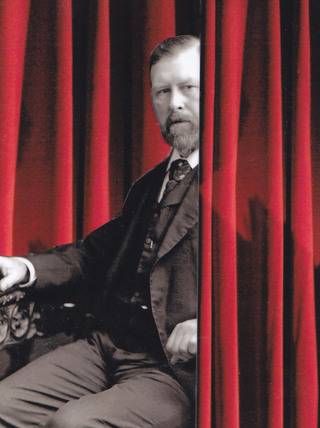 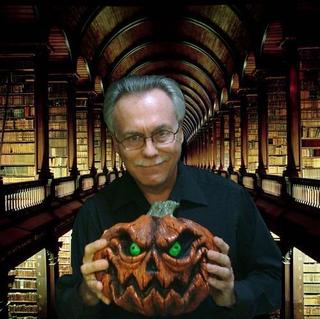 While in residence at Trinity College Dublin, working on his 2012 death centenary bio-tribute BRAM STOKER: THE FINAL CURTAIN, David is also teaching graduate seminar based on THE MONSTER SHOW for the School of English MPhil. in Popular Literature program. The class is limited to a dozen students, but you're more than welcome to audit online (well, kind of). Following are the books to read and films to view. David will post comments and photos as the term progresses. Feel free to leave your own thoughts or questions on the READER FORUM page. (Thanks to Ted Newsome for photo montage).

And now, on with the show!

REQUIRED READING/VIEWING FOR "THE MONSTER SHOW"

Class #1 (September 29)
Lecture/Discussion: Introduction to topic. The image of the monster in western culture. Roots of modern horror in German romanticism /expressionism. Early silent films, the rise of Lon Chaney as a major horror icon, and the central importance of Universal Pictures and its connection to Germany to the legacy of mass media horror. Screening:The Cabinet of Dr. Caligari (viewed in class).

Class #2 (October 6)
Lecture/Discussion: Mary Shelley and her "hideous progeny." The literary, theatrical, cinematic and cultural implications of Frankenstein: Or, the Modern Prometheus. "Mad" science as a major twentieth-century myth. Overview of critical approaches to Shelley.
Reading: Shelley, Frankenstein; Skal, The Monster Show ("You Will Become Caligari," “The Monsters and Mr. Liveright,” and “1931: The American Abyss”)
Screening: Frankenstein (Whale); The Frankenstein Files: How Hollywood Made a Monster(Skal documentary).

Class #3 (October 13)
Lecture/Discussion: Roots of the vampire myth in Slavic folklore and English literature, and the history of Dracula from page to stage to screen. Overview of critical approaches to Stoker.
Reading: Stoker, Dracula (including Norton edition essays "Kiss Me with Those Red Lips" by
Craft and "The Occidental Tourist" by Arrata);
Tolstoy, "The Family of the Wurdalak" (Skal, trans.)
Screening: Nosferatu(Murnau, excerpt);Dracula (Browning);
The Road to Dracula(Skal documentary, in-class viewing.

Class #7 (November 17)
Lecture/Discussion: The ongoing influence of German expressionism and World War I on the horror genre, with American censorship as a shaping force.
Screening: The Black Cat(Ulmer); Bride of Frankenstein(Whale).
Reading: Skal, The Monster Show ("Angry Villagers")

Class #10 (December 8)
Lecture/discussion: The rise of transgressive horror and gruesome special effects during and after the Vietnam era.
Screening: Night of the Living Dead (Romero);
The Exorcist(Friedkin).
Reading: Skal, The Monster Show ("Scar Wars"). 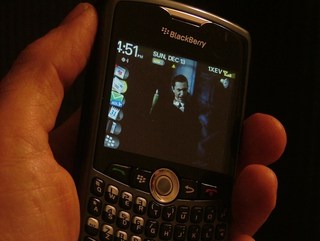 Yes, David finally managed to get Lugosi's "I am... Dracula" as a ringtone. 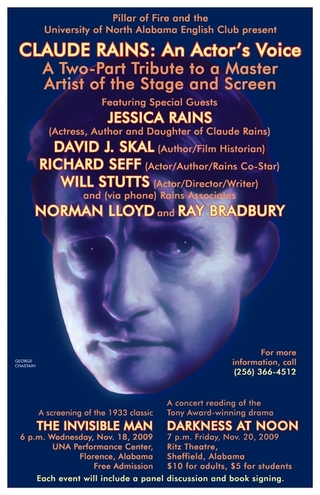 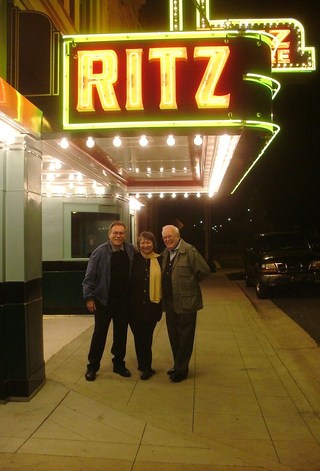 With Jessica Rains and Richard Seff at the fabulous Ritz Theatre in Sheffield, Alabama. 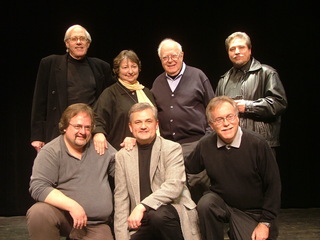 Images from the gala tribute at the Egyptian Theatre, Hollywood, October 20, 2009. 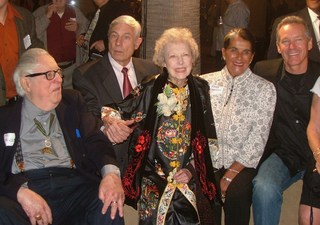 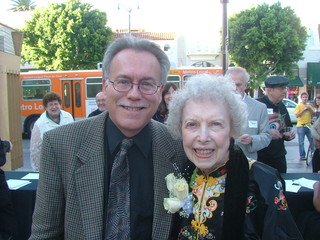 In all the years they've known each other, David's done the real aging! 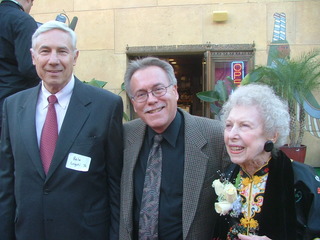 David J. Skal's ROMANCING THE VAMPIRE, coming just in time for Halloween from Whitman Publishing, is an unprecedented treasure trove of undead history, iconography, and memorabilia, and a must-have book for your favorite vampire fan. Want a slave forever? Make ROMANCING THE VAMPIRE this year's holiday gift and see what happens...

ADVANCE PRAISE FOR "ROMANCING THE VAMPIRE"

"As a writer, Romancing the Vampire author David J. Skal shares all the best characteristics of evolving vampires. His Hollywood Gothic and The Monster Show--and a host of other learned and lively books and DVDs--examine a variety of fiends with wit, daring and panache. But he always returns to vampires, ingesting their many facets, from the dangerous audacity of their formative years to the shrinking sensitivity of their new resurrection. Like his undead subjects, David J. Skal is fluid, subtle, penetrating and an unforgettable spokesman for all seasons."

--Nina Auerbach, author, Our Vampires, Ourselves.

"I am particularly glad to add this book to my library. It is an amazing and unique treasure chest of dark gems from the underworld. It is a sensory delight, a marriage of David J. Skal's fluid and evocative prose and an unparalleled collection of rich, compelling art and images. This is one of those rare books that never ceases to intrigue, inform, and entertain."

--Rosemary Ellen Guiley, author of The Encyclopedia of Vampires, Werewolves and Other Monsters

David has returned from his revealing Parisian rendezvous with gargoyles, guillotines, and the Grand Guignol. His travelogue, PARIS FOR PHANTOMS, will appear here for Halloween. 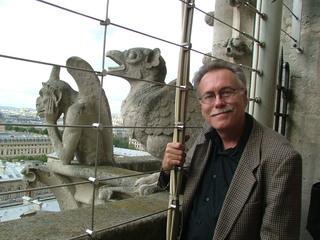 THE OBAMA-MAN WILL GET YOU

Not David's sentiment at all, but the scary summer Zeitgeist makes vitally necessary the debut of I HEAR AMERICA SCREAMING: THE MONSTER BLOG. Click above for the inaugural installment. 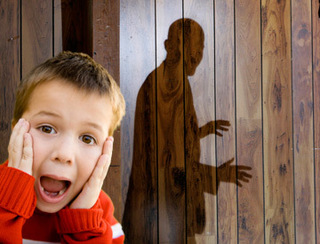 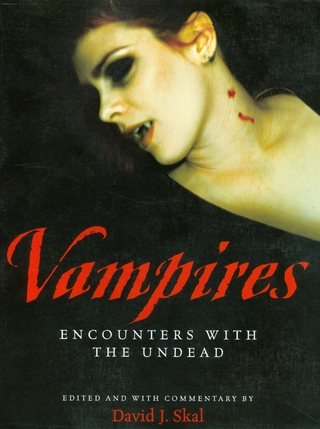 David's best-selling vampire anthology, now six years in print, has been reissued with a striking new cover by Black Dog and Leventhal. Over 600 pages of classic vampire fiction, nonfiction, illustrations and commentary. 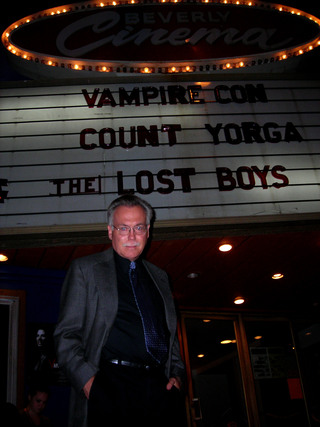 The "fluid, subtle, and penetrating" author (see below) emerges from emcee duties at a recent Vampire-Con triple feature, looking for new blood. (Photo by Matt Dinan) 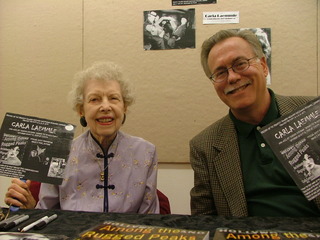 "AMONG THE RUGGED PEAKS THAT FROWN DOWN UPON THE CAHUENGA PASS..."

On Saturday, August 8, David moderated an audience discussion with film legend Carla Laemmle at the Goldwyn Library in Hollywood. Carla fielded questions and signed copies of Among the Rugged Peaks, an "intimate biography" written by her close friend Rick Atkins. Carla, the niece of Universal Pictures founder Carl Laemmle, spoke the first words of dialogue in 1931's Dracula: "Among the rugged peaks that frown down upon the Borgo Pass are found crumbling castles of a bygone age." Her Hollywood memories still as vivid as ever, Carla will celebrate her 100th birthday October 20, an anniversary which, by strange coincidence, she shares with Dracula's star Bela Lugosi. At last report, the reclusive Lugosi has no public appearances planned, but records indicate he'll be 127.

David J. Skal, best-known as author of THE MONSTER SHOW: A CULTURAL HISTORY OF HORROR (1993, revised 2001), is widely regarded as one of the world's most provocative and original historians of the dark side of popular culture. His 1990 book HOLLYWOOD GOTHIC ("the ultimate book on Dracula," according to Newsweek) set a high standard for cinematic archeology and sociology, and was instrumental in Universal's restoration of the rare, 1931 Spanish-language version of Universal's DRACULA, now available on DVD.

With Nina Auerbach, he is co-editor of the Norton Critical Edition of Bram Stoker's DRACULA, generally regarded as the defintiive academic edition; and, with Elias Savada, co-author of DARK CARNIVAL: THE SECRET WORLD OF TOD BROWNING. His many other books include DEATH MAKES A HOLIDAY: A CULTURAL HISTORY OF HALLOWEEN, SCREAMS OF REASON: MAD SCIENCE AND MODERN CULTURE, and the comprehensive anthology VAMPIRES: ENCOUNTERS WITH THE UNDEAD.

As a documentary filmmaker, he has produced, written and directed a dozen historical features for DVD, including a behind-the-scenes chronicle of the Academy Award-winning film GODS AND MONSTERS, and critically-acclaimed retrospectives on Universal Studios' classic horror and science fiction films. His extensive media appearances have included the TODAY show, CHARLIE ROSE, as well as NPR's ALL THINGS CONSIDERED, MORNING EDITION, and FRESH AIR. He has lectured at dozens of colleges, universities, and cultural institutions, and in 2002 was the first historian invited to speak on the topic of classic American horror movies at the Musee du Louvre in Paris.

Click on titles in SELECTED WORKS at right for complete information on David Skal's books and documentaries, including text excerpts, reviews, and full publication histories.

The EVENTS menu at the top of page includes a regularly updated guide to David Skal's lectures, readings, and bookstore appearances, as well as a full list of previous speaking engagements at colleges, universities, and museums.

For information on all publishing or media rights, please contact the author's literary agent:

For information on college lectures and other speaking engagements, please contact David directly: